The term ‘heavy metals’, is most commonly used to describe metallic elements of higher atomic mass that are toxic at low concentrations.  If a consumer product, which is used for contact with food, has high levels of a heavy metal then it can be hazardous to human health.  The short term effects of heavy metal poisoning can range from skin irritation to vomiting, but high level exposure can cause anything from liver damage to renal failure.

In order to demonstrate that all Lotus Rock pans are free of heavy metals that can leach into cooked food and cause poisoning, an Extractable Heavy Metals Test was commissioned with SGS Testing Services Ltd.  The testing standards were done in accordance with LFGB* (German food law) regulations.

*In September 2005, the new German Food commodity and Feed Law (Lebensmittel – Bedarfsgegenstandegesetz und Futtermittelegsetzbuch –LFGB) replaced the old German Food & Commodities Act (Lebensmittel und Bedarfsgegenstandegesetz–LMBG). Within the kitchenware industry LFGB is considered to have the most stringent test standards for assessing the level at which heavy metals can be extracted from a manufactured product. 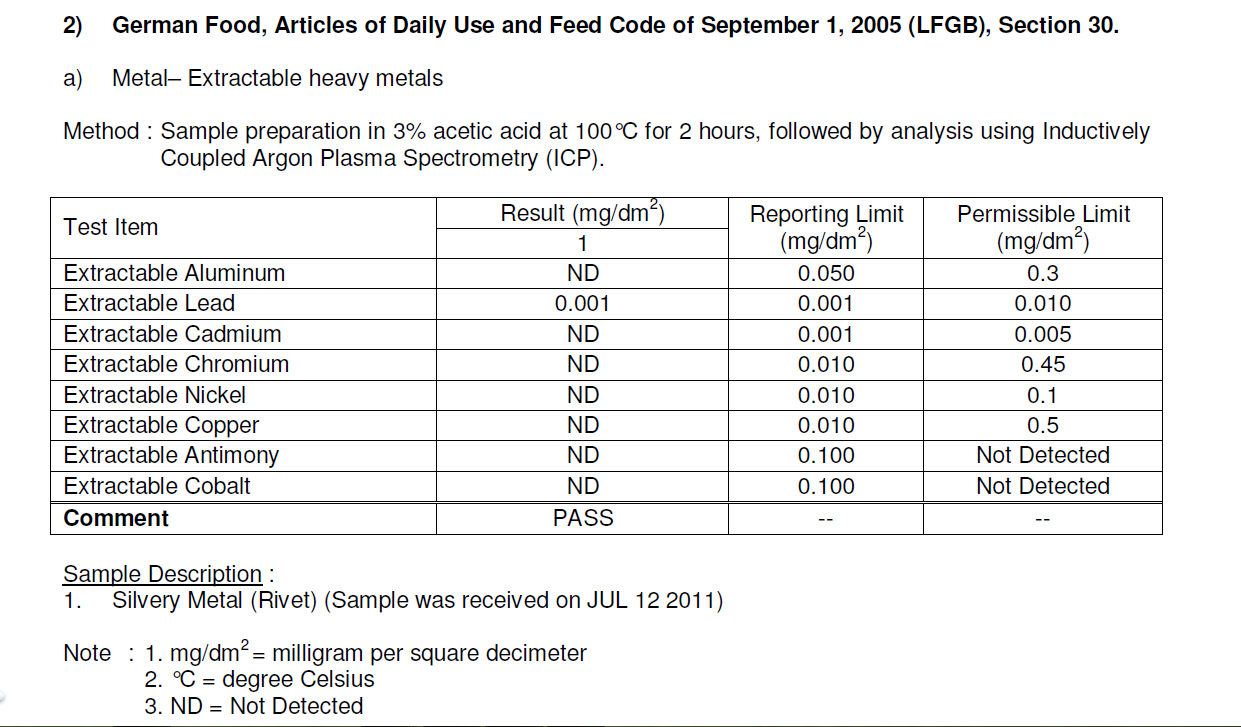 As is shown above, a number of heavy metals were tested for in the Lotus Rock pan using an acid solution, for example, similar to a recipe which might use tomatoes to make a sauce.  Some of the heavy metals that were tested for included Cadmium and Mercury; these are toxic to the human body as they undergo bioaccumulation. This means that they are absorbed by the body at a faster rate than they can be removed, and, over a period of time, can cause chronic poisoning, even if the levels found in the environment are low. Other heavy metals, such as Copper, are essential to bodily functions, but at higher levels they begin to alter metabolic processes and become toxic.  Other than Cadmium, the other heavy metal considered to be most toxic to human health is Lead.  High levels of exposure to lead can have numerous, severe health problems.  These include neurological damage and damage to organs such as the liver and kidney.