While shopping in a department store, the average consumer may not consider the base concavity of a cooking utensil their most important consideration when they are making a purchasing decision.  More likely the price of the item, the look and feel of the surface coating, and perhaps the pan’s weight and appearance are all reasons which a consumer might decide are most important before they buy a cooking utensil, such as a stir wok. 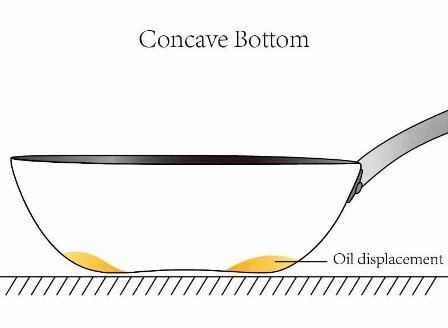 However, if the base of a pan is not made according to the correct specifications then it could become obsolete for cooking use quite quickly, thus negating any benefits that the pan might have had because of its price, material quality or attractive appearance.  For example, if the concavity of the pan is set too high then the heat source, from a cooking top surface such as a gas or electric stove, could force the centre of the pan to rise upwards to quite a large extent.  Consequently, the pan would then have a bump in the centre which would cause cooking oil and sauces to slide to the edge of the pan. 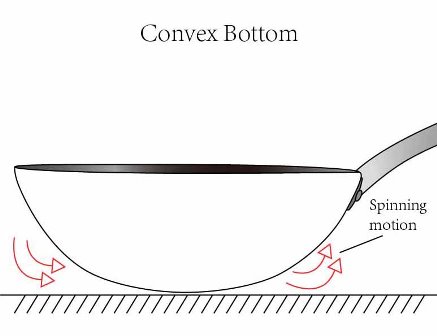 Alternatively, another difficulty may arise if the pan concavity is too shallow.  This would mean that heat from the stove top would have a stronger effect towards the side of the pan and push the edges of the bottom upwards, which would then create a convex shape at the bottom of the pan.  This would not only cause cooking ingredients to congregate in the centre of the pan, and so reduce cooking space, but it would also create a safety hazard as the pan would spin around during cooking.

So, for the reasons stated above, it is essential for the durability of all pots and pans that they have the correct bottom concavity height. If they do not, then whether the pan is made with high quality material or the non-stick coating is excellent becomes irrelevant because either a spinning motion or highly concave pan will develop on the bottom.

There is a commonly used test in the kitchenware industry to demonstrate whether the concavity of a cookware utensil is correct or not.  This test involves turning a pan upside down and placing a specially designed, straight edged measuring instrument across the bottom of the pan.  This test requires that the pan’s concavity is measured both before and after it has been heated.  The cold condition (room temperature) test stipulates that the pan must have a concavity of between 0.3% – 0.6%.  The warm condition test (200 degrees +/- 5 degrees dry heating) specifies that after the pan is heated the bottom must not have a concavity of more than 0.3%.

The Lotus Rock standard concave required range is between 0.003 – 0.006 thousandths.  With a concave base set between these parameters the pan should neither expand too much through the centre, which if it did would cause oil or sauces to settle at the edges of the pan, but neither should a convex shape develop at the bottom, which if it did would create a spinning motion on a flat top cooking surface.

So along with a metal utensil safe surface, a heavy gauge steel substrate, and a PTFE-free lipophilic coating, a Lotus Rock pan will, with the correct base concavity, be a cookware utensil that can be used for a long period of time.