Quite often when a consumer considers the features of the coating for a Lotus Rock pan they might be impressed that it is metal utensil safe, or alternatively that it has very high heat and abrasion resistance. What they may not appreciate as much is the actual thickness of the Lotus Rock coating and the advantages that come with it. As you can see in the chart below, when compared to other commonly used non-stick coatings, Lotus Rock’s hard ceramic coating is quite considerably thicker. Even compared to a sol-gel ceramic coating, which is often advertised on the market for its strong, thick construction, the Lotus Rock coating is more than twice as thick. 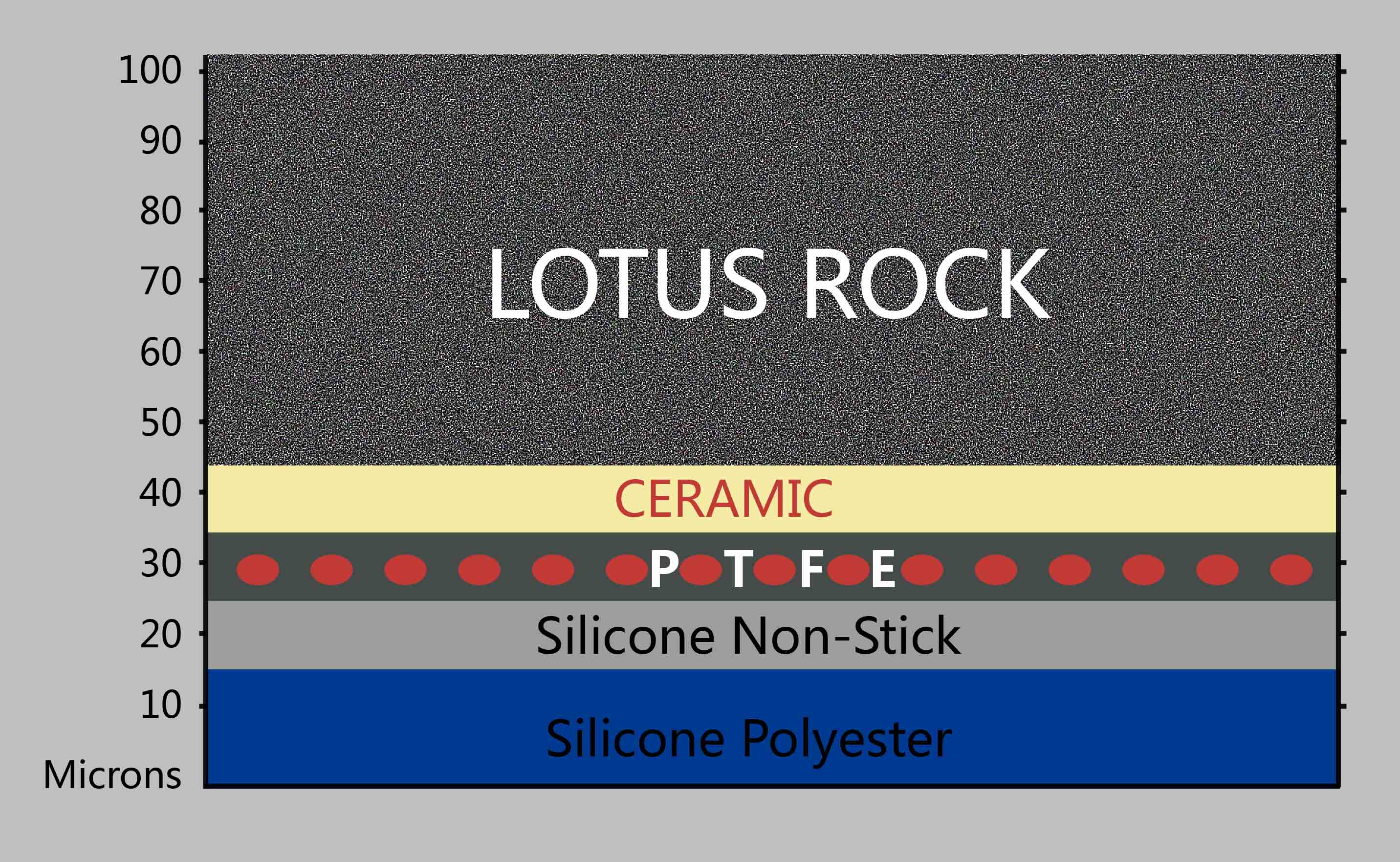 There are a number of significant advantages to a cookware utensil having a thick coating. First, it improves the heating effect of the pan. Most pots and pans on the market are either just a metal such as cast iron or stainless steel, or they have a metal substrate with a coating. For a cookware utensil the metal’s main purpose is for heat conduction; when the pan is heated the atoms within the metal lattice structure bounce into each other and thus pass on energy from the stove directly to the food. The two main benefits of a coating is to protect the pan from oxidation, and provide some non-stick release for easier cooking and cleaning. However, whether they are coated or not coated what a lot of these pans lack is the ability to retain heat within the pan. One way to improve the heat retention of a cookware utensil is increase the thickness of the metal, for instance, as explained here, Lotus Rock is made of heavy gauge 2.0mm steel, which with is highly dense carbon steel structure is much better than a metal such as aluminum at holding on to heat. But yet, with a Lotus Rock pan, its heat retention is further improved because of the highly thick ceramic layer of 100 microns on it. The thick ceramic layer acts as an insulator around the pan, which is highly beneficial for high heat cooking techniques such searing, sautéing, stir frying, barbecuing, and grilling that require a hot pan, which doesn’t suddenly drop in temperature when the food is added.

Another important consideration which is often overlooked when considering the thickness of a coating for a pan is the exterior coating. A lot of cookware manufacturers, when they label that their pan has a coating thickness of 45 microns, often neglect to mention that this is only for the interior of the pan. Most often in order to save on cost, the exterior of cookware is sprayed with a silicone polyester coating, which is rarely thicker than 15 microns. This has very little effect on heat dispersion or retention for a pan and is purely there just to protect the pan from the atmosphere around it. With a Lotus Rock pan on the other hand, it has the same thickness on the interior and exterior of the pan. So quite often a general non-stick pan, when you add together both the interior and exterior coating, does not exceed a thickness of 50 microns. Whereas a Lotus Rock pan always has a thickness of around 200 microns, which is four times thicker than the average non-stick pan.

In addition to heat retention, a thicker coating is also advantageous for use with induction cooking top surfaces. This is because the main difficulty a lot of pans have with this type of cooking top surface is over-heating. Induction transmits heat incredibly efficiently, which for many pans can cause the metal to over-heat and deform. Or alternatively, the over-heating can cause burnt marks on the outside of the pan, or scorch the oil or food on the interior. In contrast, the thick exterior coating on a Lotus Rock pan can, because of its poorer electrical conductivity compared to a metal, slow down and disperse the heat travelling through the pan.

Lastly, a thick exterior coating of Lotus Rock protects the pan from general cooking use much better than a pan with a silicone polyester coating. Whether from scratch marks during use on the sharp edges of a gas stove, or just general abrasion that might occur over time and thus erode the coating, a thicker coating will protect the metal substrate from exposure to the atmosphere for a longer period of time.