The previous blog post described how a migration test can be done to test the surface reactivity of a cookware pan.  The benefit of a non-stick coating on a pan is that it provides a non-reactive surface whereby all kinds of ingredients, whether they are highly acidic or not, can be used for cooking without creating any undesirable colors and/ or flavors.  Generally speaking, most non-stick coatings contain a substance called PTFE.  This gives the coating its non-stick release and has been proven to have the lowest coefficient of friction (CoF) of any known solid. In other words, the majority of materials do not stick to a PTFE-based non-stick coating.  Therefore, because of its excellent non-stick release and non-reactive surface, a PTFE-based non-stick coating should pass a standard BS EN 1186-1: 2002 migration test quite easily.

However, although PTFE- based coatings do undoubtedly provide a highly non-reactive surface for a cookware utensil, they also have some significant disadvantages; one of these is a tendency of PTFE-based non-stick coatings to peel off.  Within a non-stick coating PTFE does not bond well to itself, and so by and large it doesn’t have a very stable construction.  This weak coating structure is degraded through general scratching with a utensil, and also by rubbing it with a standard abrasive cleaning pad.  Moreover, PTFE based coatings are generally quite thin, roughly 15-20 microns in thickness.  This thinness makes PTFE-based coatings quite liable to break up and expose the substrate below it, such as aluminum or steel, to foodstuffs or oxygen which could produce some undesirable reactions and damage the quality of the cookware utensil.

Lotus Rock, on the other hand, contains no PTFE or any other non-stick chemical within its coating.  On both the interior and exterior of all Lotus Rock pans is a thick ceramic layer, which is up to 100 microns thick.  This not only provides excellent protection to the steel substrate below it, but the strongly bonded construction of the ceramic layer also ensures that all Lotus Rock pans have outstanding scratch and abrasion resistance.

There are two well-known tests within the kitchenware industry, from the BS 7069 : 1988 British Standard Specification for Cookware, which can demonstrate whether or not a cookware utensil has excellent scratch and abrasion resistance.  Both of these tests have been used on a Lotus Rock frying pan. 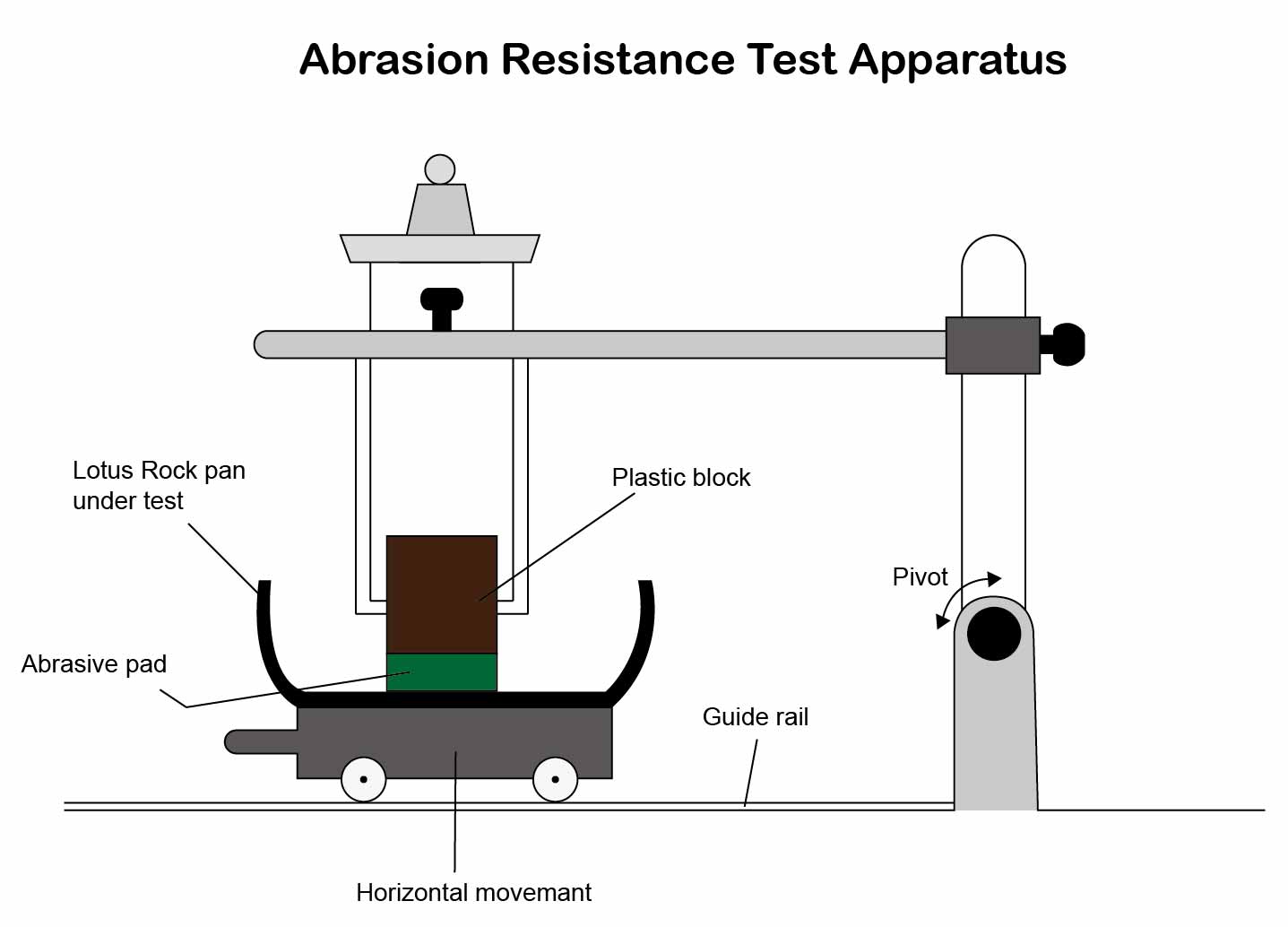 Place a quantity of corn oil, sufficient to just cover the base of the article into it.  Heat the vessel to a temperature of 220+5C and apply the loaded stylus to the heated surface.  Move the loaded stylus across the surface for a distance of not less than 80mm in 1+0.1s. 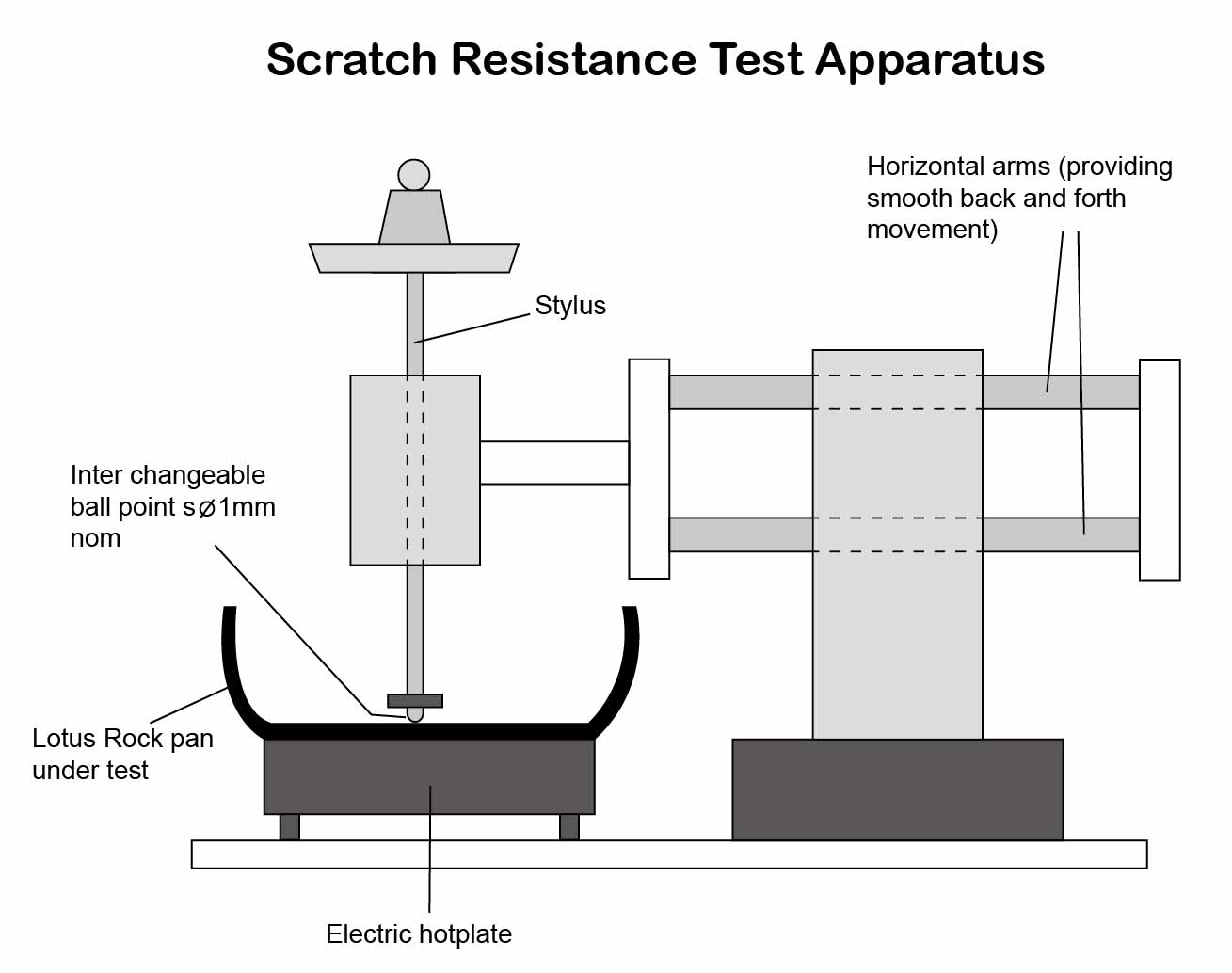 One of the significant benefits of a Lotus Rock pan is the high durability of the pan’s surface.  Unlike general non-stick PTFE-coated pans, Lotus Rock is metal utensil safe, which means a stainless steel spatula or knife and fork can be used on the surface without any concern that the quality of the coating will be impaired or the non-stick release ruined through scratching.  Moreover, for cleaning purposes a Lotus Rock pan can, unlike with a general PTFE non-stick coated pan, be scrubbed and washed vigorously with a standard abrasive cleaning pad without causing the coating to peel off.