The introduction of a new, highly innovative product into the market often generates considerable excitement and interest.  However, at the same time, there is naturally also some concern as to whether this new product is safe to use and not hazardous to human health.

A famous example of this was when PTFE-coated cookware was first introduced in the 1960’s.  This new, technological breakthrough in non-stick coating for cookware was a huge hit among consumers who wanted an easier, and more hassle-free way to cook daily staples, such as eggs.  But in the late 90’s it was found that the emulsifier used to spread the PTFE coating evenly around the pan, called PFOA, caused birth defects in laboratory animals.  This substance was subsequently banned by the Food & Drug Administration (FDA) of USA, and by government departments in many other countries.

Since its creation a number of years ago, Lotus Rock cookware and bakeware has been sold throughout the world, in countries such as USA, Australia, Israel, Turkey, South Africa and India.  Part of the reason why so many retailers and wholesalers in these countries have enthusiastically sold and recommended Lotus Rock has been the numerous testing reports, produced by reputable companies such as SGS and TUV, which have demonstrated Lotus Rock’s safety for use in the kitchen.

The kitchenware industry commonly uses a migration test to assess the reactivity of a product’s surface.  Cookware materials that are highly reactive are those which tend to have chemical reactions with other substances around them.  Highly reactive materials include iron, copper, aluminum and carbon steel.  Highly reactive cooking surfaces are disadvantageous for certain ingredients and ways of cooking because the reactions can produce undesirable colors and/or flavors.  No Lotus Rock pans are highly reactive with any ingredients because they have a thick non-reactive ceramic layer on both the interior and exterior of the 2.0mm carbon steel substrate.  Further, the interior of all Lotus Rock pans has an additional top coating of silicon-oxide crystal, which is permeable to cooking oil but impervious to other substances.  Thus, highly reactive ingredients such as tomatoes, spinach, wine and lemon juice can be used on Lotus Rock pans without creating any chemical reactions.

The most commonly used migration test to demonstrate whether or not the surface of a cookware utensil is reactive to different ingredients, set up in accordance with British and European standards, is BS EN 1186-1.2 2002.  This test involves heating four different simulants on a cookware item, at different temperatures and for different periods of time, before determining whether any part of the surface of the cookware has reacted with the simulant.  These four simulants are:

The table below is the result of just such a BS EN 1186-1.2 2002 test, one which was performed on a Lotus Rock frying pan, grill pan and saucepan. 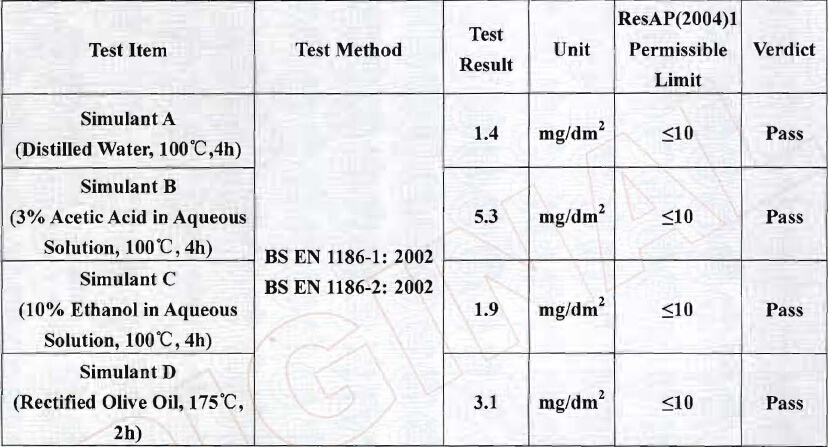 The above BS EN 1186-1: 2002 migration test clearly proves that a Lotus Rock pan can be used for a variety of cooking methods, such as boiling, frying and deglazing, and can be cooked with a variety of different ingredients, without any concern that the an unwanted reaction might take place with the pan’s surface.