The metal substrate for all Lotus Rock pans is heavy gauge carbon steel.  There are numerous reasons why Lotus Rock uses this substrate instead of more commonly used metals for cookware, such as aluminum or stainless steel, as explained here.  Traditionally for cookware usage carbon steel is often sold as uncoated, with just a protective coating on it which needs to be removed prior to use.  Generally, the instructions on the packaging for uncoated carbon steel cookware items such as stir woks, frying pans and paella pans advise the consumer to season the pan before use.

What exactly is seasoning?

According to Wikipedia, seasoning is “the process of treating the surface of a saucepan, wok, crepe griddle or other cooking vessel with a stick-resistant coating formed from polymerized fat and oil on the surface.”  It goes on to say that it is desirable for carbon steel cookware “because otherwise they are very sticky to foods and rust-prone. It is generally not desired on other types of cookware either for cosmetic reasons or because the chemical composition of the pan already results in a non-stick surface.”

So, basically uncoated carbon steel cookware needs a polymerized oil film over it for two reasons:

Regarding the first reason to season a carbon steel pan – corrosion resistance – this is not necessary for Lotus Rock.  This is because on both the interior and exterior of all Lotus Rock pans there is a thick ceramic coating.  So, as long as the Use & Care instructions are followed properly a Lotus Rock pan will not rust because the coating prevents the surface of the steel from any form of oxidation. 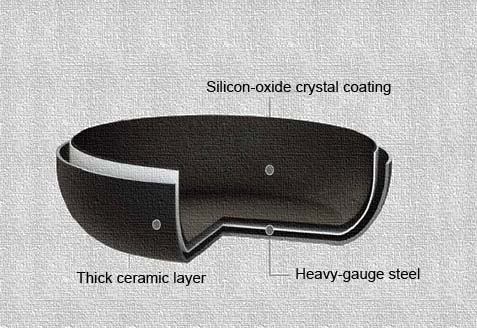 Is seasoning needed for non-stick release?

However, although both seasoning and the process explained above do involve heating oil on an iron pan, the latter cannot be termed as seasoning for two reasons.  First, seasoning is a reaction between the oil and the steel surface.  With all Lotus Rock pans, cooking oil is never in contact with the heavy gauge steel substrate; instead the added cooking oil rests within the silicon-oxide crystal coating and on top of the thick ceramic coating.

The second reason is that for a carbon steel pan to be properly seasoned the oil needs to react with the steel surface and be polymerized.  For seasoning to be successful the oil needs to surpass its smoke point, and then the chemical composition of the oil will alter to form a solid, hard film over the steel.  For a Lotus Rock pan to have an effective and potent non-stick release or for that matter any other non-stick pan to be maintained well, the cooking oil should never be allowed to polymerize.  If done so, it will form a barrier between the food and silicon-oxide crystal coating, which will impair the non-stick quality of the pan.

Disadvantages of a seasoned pan 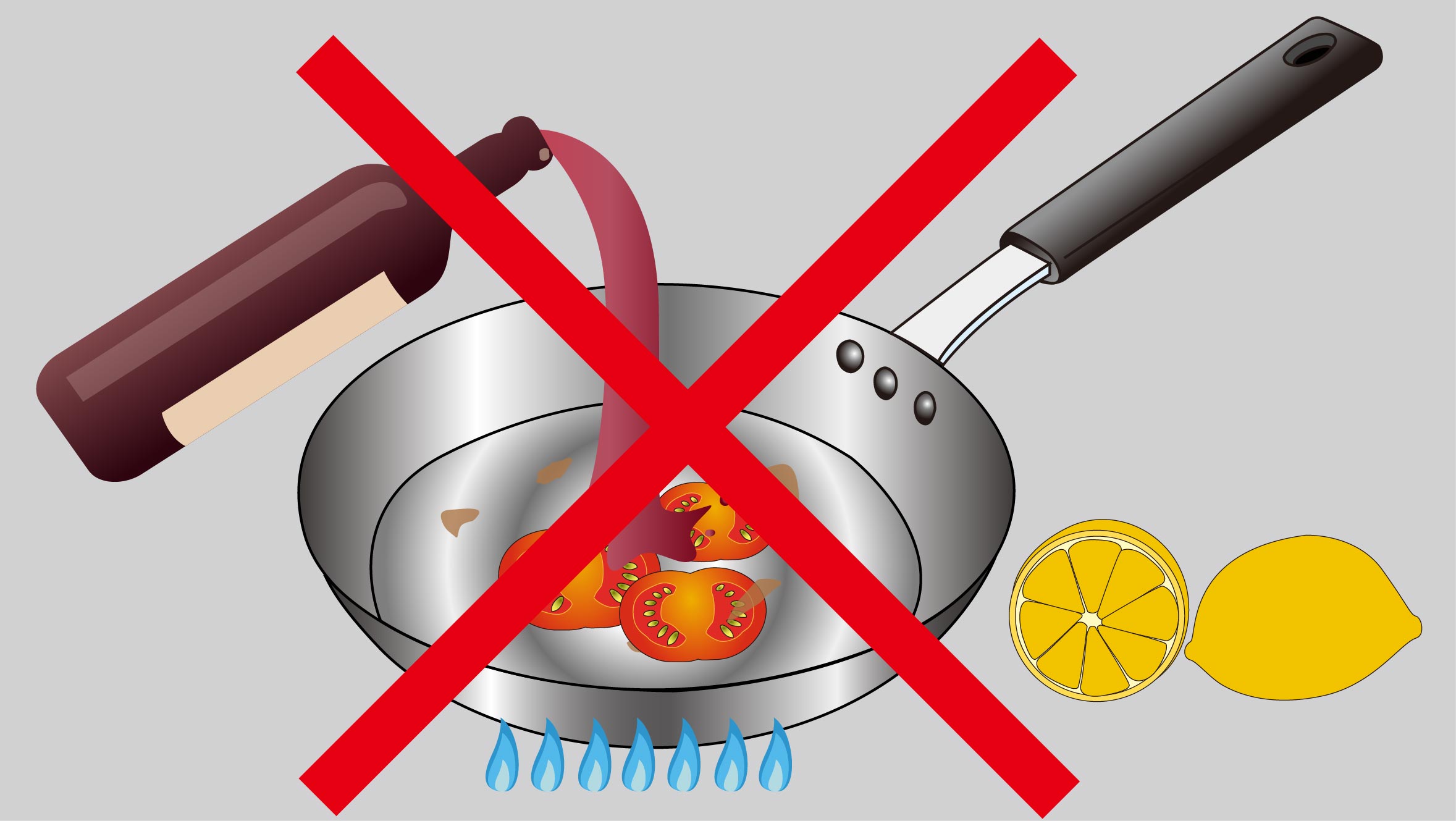 Although a seasoned steel pan undoubtedly has many benefits, to continually re-season a pan can be for some quite a hassle.  Moreover, a seasoned pan does have some limitations when it comes to cooking.  For example, ingredients which have are highly acidic cannot be used, such as lemon juice or tomatoes, because they will remove the non-stick patina which with continued use of fat for cooking occurs naturally on the pan.  Another difficulty with a seasoned pan is that it is not suitable for de-glazing.  Once the fond has built up on the pan after searing meat, generally an acidic liquid such as wine or broth is added to create a sauce.  However, as has already been explained, the acidic nature of these sauces will react with the steel surface and impair the non-stick quality of the pan. 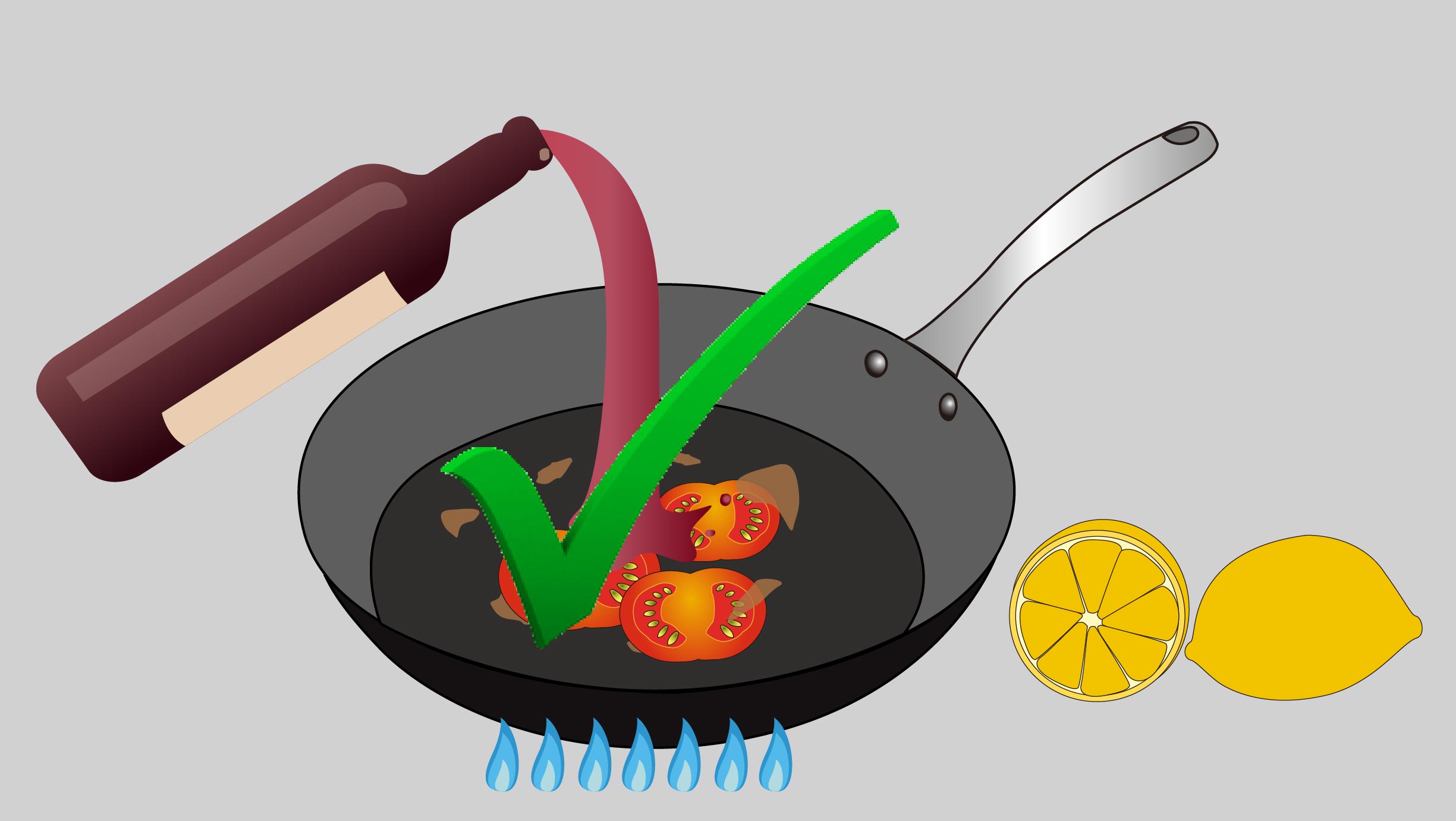 The silicon-oxide crystal coating of a Lotus Rock pan on the other hand is much less troublesome for cooking with.  All kinds of acidic ingredients can be used with a Lotus Rock pan.  So, for instance, a spaghetti Bolognese can be cooked on a Lotus Rock pan without any detriment to the quality of the non-stick release.  In addition, a sauce such as gravy can be prepared from the fond after some chicken breasts have been seared on the stove top.

Generally, in the market place today carbon steel cookware, such as with famous brands including DeBuyer or Rosle, is sold uncoated.  In order to protect these pans from rust, and to give them a non-stick release, the consumer is advised to season them before use.  Seasoning involves heating oil to a high temperature on a steel pan, passed its smoke point.  During this process the pores of the steel open and while this is happening the polymerized fat creates a hard, glassy film between and over the steel surface.  With this treatment the steel pan is now not only protected from rust, but also conditioned with a non-stick effect.

Although Lotus Rock does use carbon steel, it does not need to be seasoned because on both the interior and exterior of the pan is a thick ceramic coating protecting it from oxidation.  This coating, just like the polymerized fat of a seasoned pan, provides effective corrosion resistance.  However, unlike an uncoated steel pan, a Lotus Rock pan doesn’t give the consumer the hassle of re-seasoning the pan after each use.  The thick ceramic coating on Lotus Rock is metal utensil safe and is highly durable for long lasting protection from rust.

In addition, a Lotus Rock pan also doesn’t need to be seasoned to create a non-stick release because on top of the thick ceramic interior is a silicon-oxide coating.  When oil is added to a Lotus Rock pan it permeates the lipophilic surface of the silicon-oxide coating to create a natural, non-stick effect.  A significant advantage of the silicon-oxide crystal coating over the non-stick patina of a seasoned pan is that it is safe to use with acidic ingredients or sauces, so the consumer can use the pan for a greater variety of cooking methods.